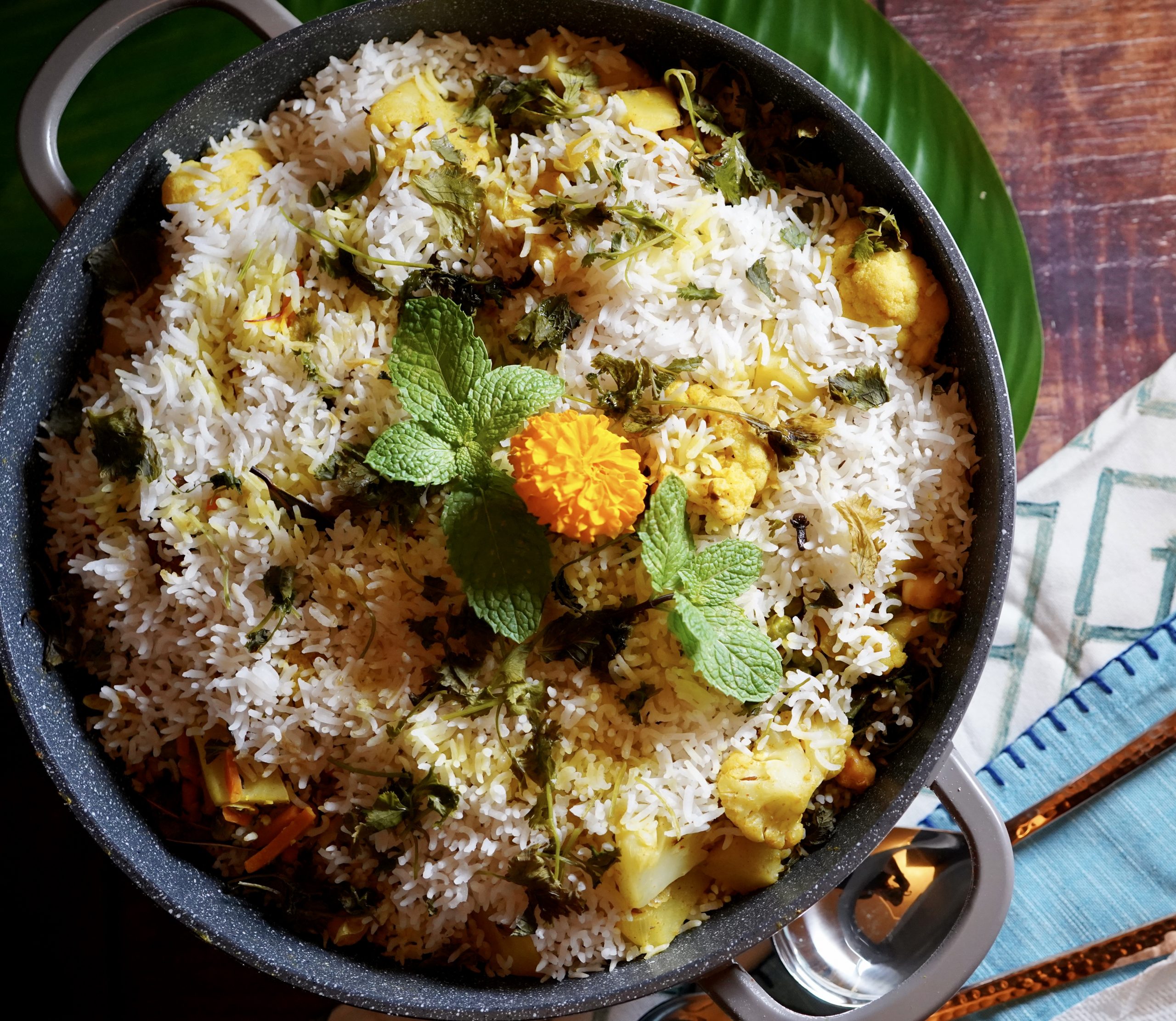 Behold! An authentic vegan vegetable biryani  Biryani recipe with simple, easy-to-follow instructions (no curveballs!) and mouthwatering, traditional  Indian flavor. This recipe includes tips on getting fluffy rice, tender vegetables, and the distinct biryani taste-tested to perfection!
I have always been a massive fan of biryani, and my friend makes my favorite one.

This is inspired by her recipe. It is a vegan version of her classic Hydrabadi biryani. This is a dum-style cooked biriyani that I personally love. Perhaps one of the famous Indian rice biriyani recipes is made with a combination of vegetables and spices. It is a vegetarian version of the meat biriyani with biriyani rice dum cooked inside the pan, where dum is created by sealing the pan with wheat or any other kind of dough.

Firstly, in a thick bottomed deep vessel spread in a layer of prepared biryani gravy.

HOW TO GET THE AUTHENTIC FLAVOR OF BIRYANI

The most challenging part of making biryani is getting that authentic flavor, especially since we are making a vegan version of this classic dish. Here's what I've found:

A key component in getting the authentic flavor is using much more spice (whole and ground) than you would for a typical curry. The vegetable and curry should have intense flavor, and otherwise, it's likely to mellow out when combined with the rice.
Leading into this, there should be plenty of curry or 'wet masala 'to the vegetables.
Lastly, the steaming (dum) is extremely important in marrying the flavors to give it the distinct biryani taste and aroma..REALLY BIRYANI IS ALL ABOUT THE STEAMING -DUM as it's traditionally called.

When steam permeates the rice, spices, herbs, and vegetables, it infuses the biryani with so much flavor that each bite is a treat.

WHAT POT TO USE FOR STEAMING/DUM

Though you can use any pot or pan you'd like to prepare the vegetables and parboil the rice, a Dutch oven or deep pot (at least 5 qt) will be helpful for the steaming ('dum') stage.

Heavy-bottomed or cast iron dutch ovens take longer to develop steam, but they are better at preventing the rice from sticking to the pot.
The goal during the steaming stage is to keep the steam inside, and deep, straight-edged pots are better at retaining moisture.

I've kept the layering simple, but you can make it as festive as you'd like by fried onions or green chili peppers in between or on top of the vegetables and rice.

To prepare rice for the Biryani,
1- first, in a large vessel, boil 8 cups water along with 2 bay leaves, 1 inch cinnamon stick, ½ tsp cloves, 1-star anise, ½ tsp pepper 2 tsp oil, and 1 tsp salt.
2-Now add 1½ basmati rice, soaked for 20 minutes. Stir well.
further boil for 10 minutes or till the rice is almost cooked. (do not cook the rice thoroughly, as it will get cooked in dum while preparing Biryani)
drain off the water and rinse with cold water to stop the cooking process. Keep aside.

7-Further, add 1 cup water. Cover and cook for 15 minutes.
Cook till the vegetables is almost cooked.

Tips::
If you do not want to seal with dough, just cover with aluminum foil and cook.
Also, add vegetables of your choice to make it more nutritious.
Additionally, use a thick bottomed vessel and cook the biryani on low flame, else the biryani might burn at the bottom.
Finally, Hyderabadi veg dum biryani tastes great when served after 2-3 hours of preparation.

This is the best creamy vegan Alfredo sauce recipe you'll ever find, and it's easy to make at home with no dairy, no eggs, and no cashews required!!

This is the BEST vegan chocolate cake you’ve ever had…maybe even the best chocolate cake. Super rich, moist, and topped with the most decadent chocolate ICING for the perfect chocolate lovers cake! You won’t believe this cake…

All time favorite ladoo is almost all Indian households - this besan ladoo is vegan gluten free and decadently delicious 😋. Super excited to convert this traditional recipe to house favorite 😍